There are certain movies that beg for a sequel and there are movies where the first is enough. With the announcement that Warner Bros. and Legendary Pictures are moving ahead with a sequel for Clash of the Titans and New Line and Walden Media are taking a second Journey to the Center of the Earth I’m a bit torn on how I feel about this news.

Perhaps the best part of this news is the fact that if they decide to when they go 3D with both pictures they can do this during production and not post. I saw Clash of the Titans last night in 3D and cringed at how bad it was. I know this has been talked about everywhere already, but it was so bad that I had trouble keeping my attention on the movie while, almost, unintentionally seeking out the flaws by the shoddy 3D.

Word from Deadline, who broke the news, is that everyone who survived Clash 1 will return to their respective roles demi-gods, gods, and humans alike. With means that Sam Worthington will be back as Perseus, and lovely Gemma Arterton as lo.

However, director Louis Leterrier will not be returning to the director’s chair, but will stay on as a producer. The new script is being written by the man who scripted the Green Lantern for Warner, Greg Berlanti.

As for Journey, the studio is working Brendan Fraser over to return to the role, but he’s teetering without director Eric Brevig, who is currently filming Yogi Bear… in 3D (during production I hope). However, if the studio goes ahead without Fraser on board they’ll just structure it around the potential next Spider-Man, Josh Hutcherson.

What do you think? Personally, I enjoyed both films, but not enough that I believe they deserve/need a sequel. 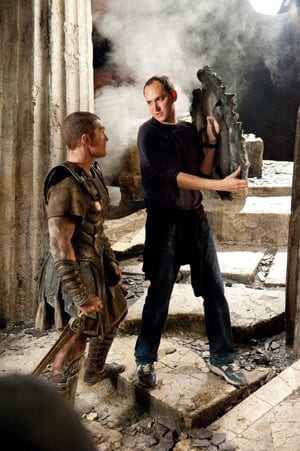 Clash of the Titans Journey to the Center of the Earth Legendary Pictures. Sequel Warner Bros.

Shane MacDonald
Since seeing Star Wars on TV as a child Shane has been hooked on movies. In 2001 he decided to start up his own webpage dedicated to his new love DVD. Now, over 20-years later he continues to FEED YOUR HUNGER with the latest Theatrical, Blu-ray and DVD reviews.

This site uses Akismet to reduce spam. Learn how your comment data is processed.

February Release for House of Gucci on Blu-ray

Resident Evil: Welcome to Raccoon City 4K (Steelbook) and Blu-ray on the Way

No Ads. Straight to the facts news, reviews and more.

The Mitchells vs The Machines – Blu-ray Review

There are no users currently online

We use cookies on our website to give you the most relevant experience by remembering your preferences and repeat visits. By clicking “Accept”, you consent to the use of ALL the cookies.
Do not sell my personal information.
Cookie settingsACCEPT
Manage consent

This website uses cookies to improve your experience while you navigate through the website. Out of these, the cookies that are categorized as necessary are stored on your browser as they are essential for the working of basic functionalities of the website. We also use third-party cookies that help us analyze and understand how you use this website. These cookies will be stored in your browser only with your consent. You also have the option to opt-out of these cookies. But opting out of some of these cookies may affect your browsing experience.
Necessary Always Enabled
Necessary cookies are absolutely essential for the website to function properly. These cookies ensure basic functionalities and security features of the website, anonymously.
Functional
Functional cookies help to perform certain functionalities like sharing the content of the website on social media platforms, collect feedbacks, and other third-party features.
Performance
Performance cookies are used to understand and analyze the key performance indexes of the website which helps in delivering a better user experience for the visitors.
Analytics
Analytical cookies are used to understand how visitors interact with the website. These cookies help provide information on metrics the number of visitors, bounce rate, traffic source, etc.
Advertisement
Advertisement cookies are used to provide visitors with relevant ads and marketing campaigns. These cookies track visitors across websites and collect information to provide customized ads.
Others
Other uncategorized cookies are those that are being analyzed and have not been classified into a category as yet.
SAVE & ACCEPT
Powered by